My scene from Stoya’s directorial debut film is available online through a LustCinema membership (where you can also watch more of my scenes) or through Stoya’s platform ZeroSpaces.

Stoya got inside my head when describing our scene in Graphic Depictions. From her blog:

The answer is both. But if we’re defining pornography as portrayals of sexual subjects for the purposes of arousal, we can’t neatly parse specific activities or habits into the separate categories of ‘sex’ and ‘pornography’. This is because all partnered sex involves observation of some kind, though not necessarily visual.

Each layer of being observed tends to bring an increase in reaction to that observation, a heightened degree of communication via moans, panting, writhing.

Have you ever masturbated alone at home with the doors locked, window coverings drawn, and lights off? If you have, I’d guess you were much more internally focused than you are when having sex with a partner.

Now add a partner to that pitch-black room. Assuming all five of your senses are functioning typically, you can smell their pheromones, taste any part of them you put your mouth on, hear them mutter unintelligible nothings or shout commands to keep going, and feel their warmth and sweat.

Take that same partner and turn the lights on: you might become more conscious of the parts of your body on display to them, and appreciative of the visual stimulation their body may provide.

Bring other people into the room: the sexual acts you’re engaged in take on a degree of performance, both for the pleasure of your audience and as something the two of you might take pleasure in—you might derive enjoyment from giving others a show. 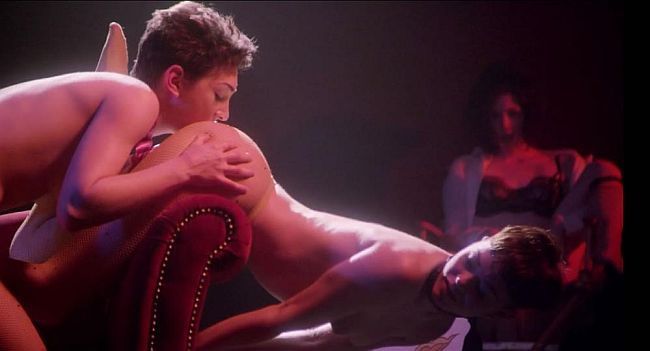 Now imagine yourself in front of a camera and absorb the knowledge that the resulting video will be seen by unknown thousands, hopefully millions, of people: this is what working as a performer in adult videos is like.
The ways in which people have sex in pornographic videos are a natural, authentic response to all those layers of observation.

So what we have here, in this scene between Jiz and Lily, is an ouroboros of looking. They look at each other, and both know that I am looking at them. We are all aware of the crew, the camera, and the collective weight of all the eyeballs that will hopefully view the resulting video.

Also, they’re beautiful and covered in rhinestones and have sex with each other. Which is a major part of why we look at pornography, right? To watch people having sex together? 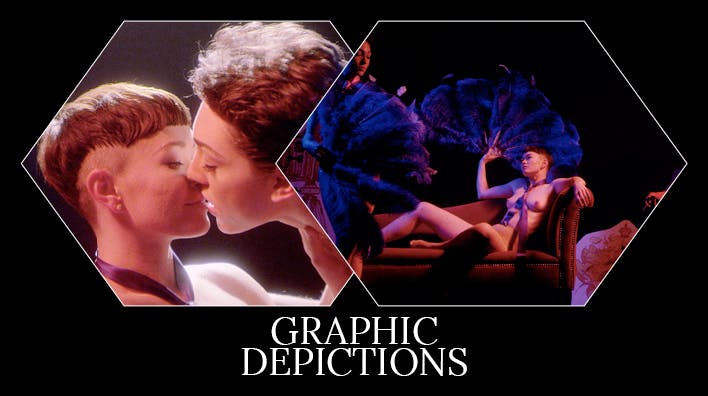